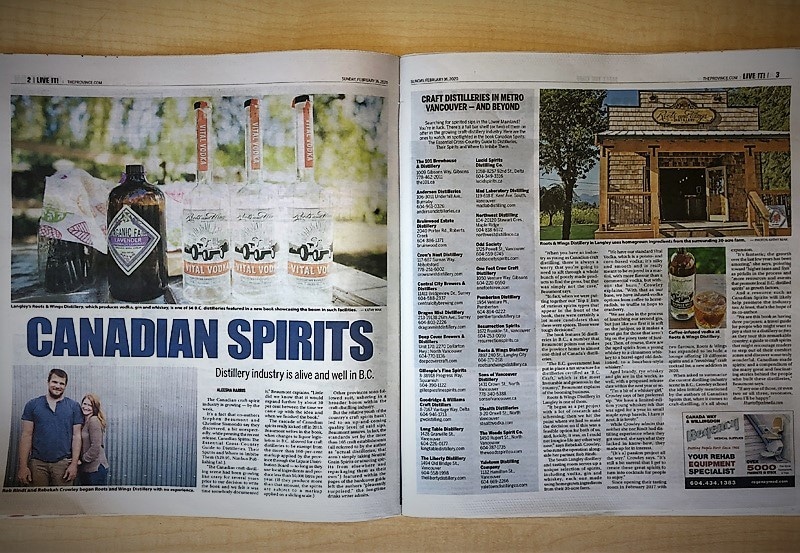 We’re very grateful for the recent media coverage, and the positive feedback, highlighting Roots and Wings Distillery in an article by The Province (Feb 16, 2020) and also appearing online in The Vancouver Sun.

Like most small businesses, we wear too many hats and have limited time or resources to access mass media opportunities. We’re always happy to answer questions from journalists and thankful for any mention in a story; but imagine our surprise when we opened The Province on Sunday, Feb 16 and found a 2-page spread about B.C. distilleries with our distillery front-and-centre! This great exposure in the news is much more than we expected. As Richard Branson once said, “A good PR story is infinitely more effective than a front page ad.”

We would like to express our gratitude to the journalist, Aleesha Harris, and The Province as well as The Vancouver Sun for featuring our craft distillery.  Below is an excerpt of the original story published in The Province.

The Canadian craft-spirit industry is growing — by the week.

It’s a fact that co-authors Stephen Beaumont and Christine Sismondo say they discovered, a bit unexpectedly, while penning the recent release, Canadian Spirits: The Essential Cross-Country Guide to Distilleries, Their Spirits and Where to Imbibe Them ($29.95, Nimbus Publishing Ltd.).

“The Canadian craft-distilling scene had been growing like crazy for several years prior to our decision to write the book and we felt it was time somebody documented it,” Beaumont explains. “Little did we know that it would expand further by about 30 per cent between the time we came up with the idea and when we finished the book.”

The cascade of Canadian spirits really kicked off in 2013, Beaumont writes in the book, when changes to liquor legislation in B.C. allowed for craft distilleries to be exempt from the more than 160 per cent markup applied by the province through the Liquor Distribution Board — so long as they use local ingredients and produce less than 50,000 litres per year.(If they produce more than that amount, the spirits are subject to a markup applied on a sliding scale.)

Other provinces soon followed suit, ushering in a broader boom within the craft-distilling industry.

But the relative youth of the country’s craft spirits hasn’t led to an up-and-coming quality level of said sips, Beaumont assures. In fact, the standards set by the more than 165 craft establishments (all referred to by the author as “actual distilleries, that aren’t simply taking Neutral Grain Spirits or sourcing spirits from elsewhere and repackaging them as their own”) featured within the pages of the hardcover guide left the authors “pleasantly surprised,” the longtime drinks writer admits.

“When you have an industry as young as Canadian craft distilling, there is always a worry that you’re going to need to sift through a whole bunch of poorly made products to find the gems, but that was simply not the case,” Beaumont says. “In fact, when we were putting together our ‘Top 5’ lists of various spirits types that appear in the front of the book, there were certainly a lot more candidates than there were spaces. Those were tough decisions!”

The book features 56 distilleries in B.C., a number that Beaumont points out makes the province home to almost one-third of Canada’s distilleries.

“The B.C. government has put in place a tax structure for distilleries certified as ‘B.C. Craft,’ which is the most favourable and generous in the country,” Beaumont explains of the booming business.

Roots & Wings Distillery in Langley is one of them.

“It began as a pet project with a lot of research and scheming, then we hit the point where we had to make the decision on if this was a feasible option for both of us, and luckily it was; as I could not imagine life any other way now,” Rebekah Crowley, who runs the operation alongside her partner, Rob Rindt, says.

The South Langley distillery and tasting room serves up a unique selection of spirits, including vodka, gin and whiskey, each one made using homegrown ingredients from their 30-acre farm.

“We have our standard Vital Vodka, which is a potato- and corn-based vodka; it’s silky and smooth and is really meant to be enjoyed in a martini, with more flavour than a commercial vodka but without the burn,” Crowley explains. “With that as our base, we have infused-vodka options from — coffee to horseradish, to truffle to hops to cranberry.

“We are also in the process of launching our second gin, but just like our first it is soft on the juniper so it makes a great gin for those that aren’t big on the piney taste of juniper. Then, of course, there are the aged spirits from a young whiskey to a cinnamon whiskey to a barrel-aged old-fashioned, to a bourbon-style whiskey.”
Aged brandy, rye whiskey and gin are in the works, as well, with a proposed release date within the next year or so.

“I’m a bit of a whiskey girl,” Crowley says of her preferred sip. “We have a limited-edition young whiskey-ish that was aged for a year in small maple syrup barrels. I have it neat. It is lovely.”

While Crowley admits that neither she nor Rindt had distilling experience when they first got started, she says that what they lacked in know-how, they made up for in interest.

“(It’s a) passion project all the way,” Crowley says. “It’s still a bit surreal that I get to create these great spirits to turn into cocktails for people to enjoy.”

Since opening their tasting room in February 2017 with two flavours, Roots & Wings has expanded to include a lounge offering 10 different spirits and a “revolving” craft cocktail list, a new addition in 2020.

When asked to summarize the current distilling-industry scene in B.C., Crowley echoed the idea initially mentioned by the authors of Canadian Spirits that, when it comes to craft-distilling, it’s all about expansion.

“It’s fantastic; the growth over the last few years has been amazing,” she says, pointing toward “higher taxes and fees” as pitfalls in the process and “more resources and events that promote local B.C. distilled spirits” as growth factors.

And a resource like Canadian Spirits will likely help promote the industry too. At least, that’s the hope of its co-author.

“We see this book as having three purposes: a travel guide for people who might want to pay a visit to a distillery or two as they tour this remarkable country; a guide to craft spirits that might encourage readers to step out of their comfort zones and discover some truly wonderful, Canadian-made spirits; and a compendium of the many great and fascinating stories behind the people who built these distilleries,” Beaumont says. “If any one of those, or even two or all three, resonates, then I’ll be happy.”